Is the mouse scared or unscared? What does the body say?

What does the mouse think?

As with these little animals, it is easy to think, focusing on what I think. What the mouse thinks is quite easy to skip. Comparatively, therefore. Much because of the size (lack of) does not have to be that important (for us).

As a pet mouse breeder and amateur ethologist and interested in domestication processes, it's important to me not only to think about what I like about the mouse, but also what the mouse thinks.

What does the mouse think ? About me? About existence? About the situation it's in?

Mice are incredibly expressive animals! (It's probably all animals in their own way, that's their way of communicating). Something that can be seen clearly on photographs as well.

So I've reviewed my old photos and picked up some clear pictures, giving my interpretation of what information they give me. In my opinion, I also know / felt the mice well irl.

But first, I want to give a little more aspect to my interpretations and thoughts.There are many descriptive adjectives that seem to belong together, but that does not. For example, the adjective scared does not have to be characterized by an untame mouse. Or, on the contrary, an unruly mouse does not have to be tame. And a mouse must automatically not be social (with people) because it's tame. Here are many exciting aspects that I do not go into more closely than this: 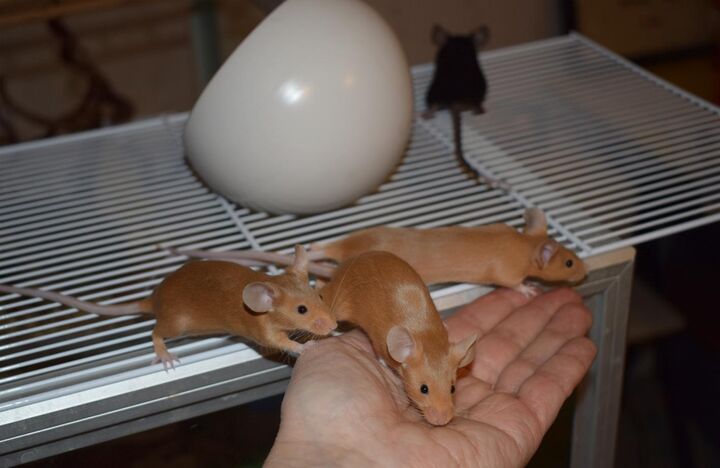 A picture is worth a thousand words! It may seem a coincidence that the black mouse is coming out of the picture, while a bunch of yellow mice turn their attention to me and the camera. It is not. The image reflects reality in an almost laughable way.The black mouse is as tame and as unscared as its sisters - but she is not social, ie not particularly interested in social interaction with people.

What does the mouse seem like? In one word: "Scary!" Why? It does not tell the picture, more than the mouse is in an above situation.

So, I can not say just by the photo if the pushing/pressing mouse is a scared or an unscared mouse. Is it the first time it is in the situation, it may just be unaccustomed. Is it twentieth time and it still thinks it's unpleasant, it's probably a scared mouse.

On the other hand, I can say that there is a mouse that chooses "freeze" in front of "planes", in situations that seem scary, ie it seems to be gaze, and hope to do that way instead of perhaps triggering a hunting instinct with any enemy by running or jumping away.

This behavior, I think, is a domestication effect of our domestic animals. Mice must be manageable, whether they are lab or hobby mice! Mice flying at the least sign of danger (real or imagined) can not be handled. They have progressively expired from all breeding, consciously or unconsciously.

The pictures show one insecure and one bold mouse. 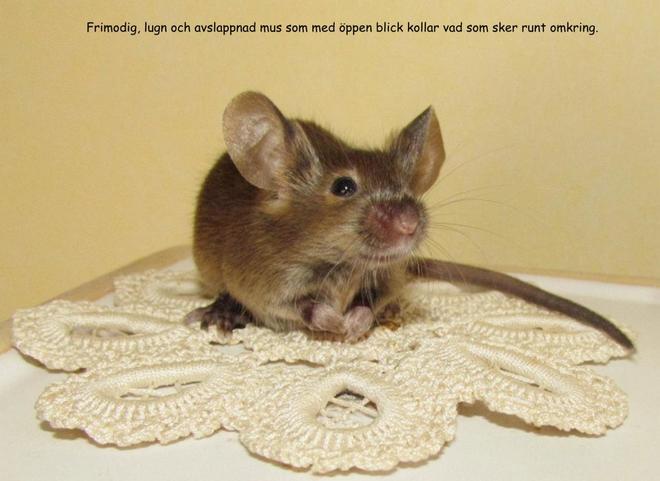 Peaceful, calm and relaxed open-minded mice are watching what's going on around 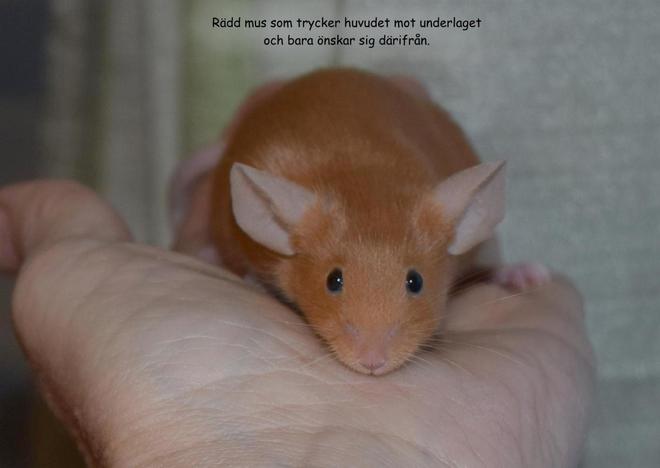 Scared mouse pushing the head against the ground and just wishing to get away from there.

A safe mouse who thinks the situation is under control, has a smooth, smooth profile when sitting still, with a back that runs like a smooth curve from manke to tail rot.The eyes have an open look and the ears are attentive. Rowanda shows a safe mouse while the little Agouti is turned off, with slightly recessed back part of the back as well as closed in the eyes and ears. 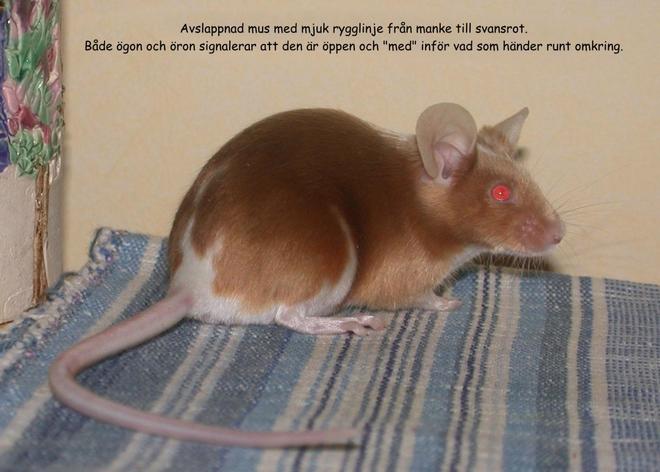 Relaxed mouse with soft backline from manch to tail rot. Both eyes and ears signal that it is open and "with" in front of what is happening around. 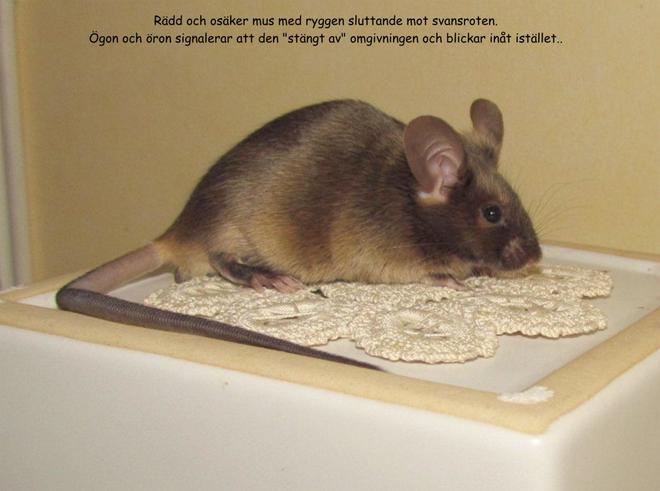 Scared and insecure mouse with his back sloping towards the tail root. Eyes and ears signal that it "shuts off" the surroundings and looks inward instead.

These mice that "press down", I think are so clear to interpret. They try to get so flat that they mingle with the surface and "disappear". But the chest can not be flattened so that the contrast between the front and the back part becomes striking. 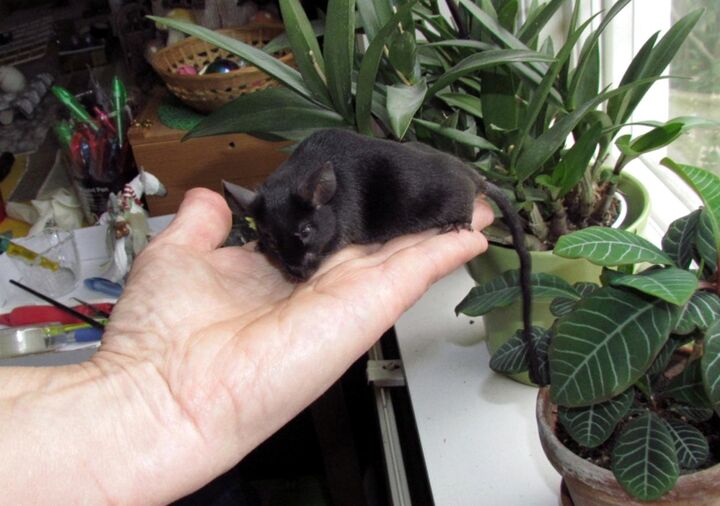 The smoother the back, the more unpleasant the situation is. Poor Ålandsrot here thought it was terrible! But he was not a very scared mouse. Still not social either, just big, beautiful and very black.

Really scared mice when picked up and / or put in new places will be gauged and turned off. It appears that the eyes and ears become expressionless. An uncertain mouse presses in different ways. If the situation seems scary, the back part goes down. Is the mouse just uncertain, it's low. It keeps the stomach close to the surface, often the head also, and the legs are often a little wide apart. 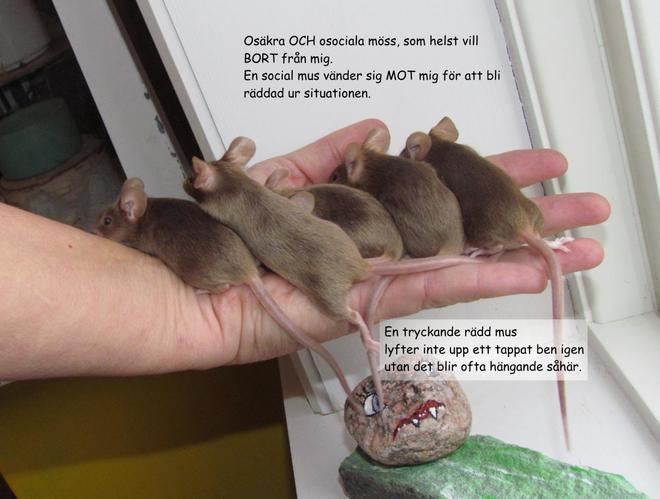 Unsafe and unsocial mice, who want to get away from me. A social mouse turns to me to be saved from the situation. A pushy scared mouse does not lift a lost leg again, but it is often hanging like this. 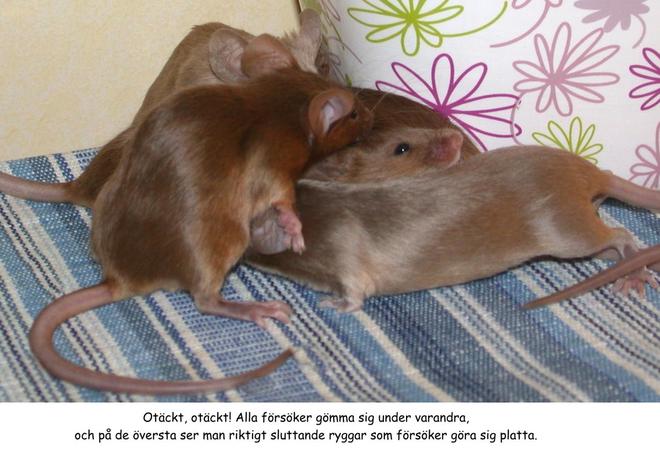 Scary, scary! Everyone tries to hide under each other, and at the top you see really sloping ridges trying to get flat. 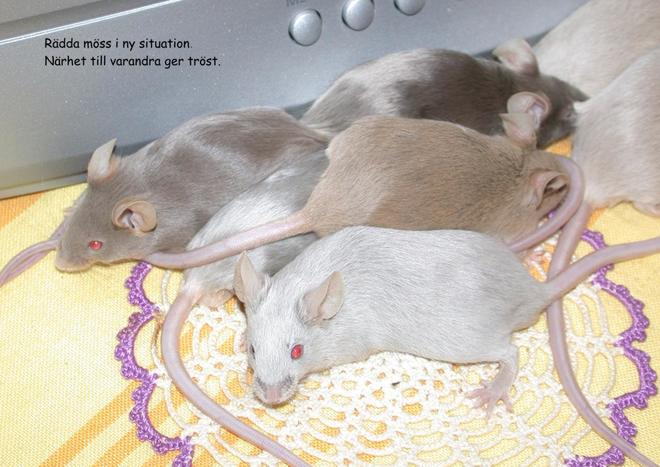 Scared mice in new situation. Closer to each other gives comfort. 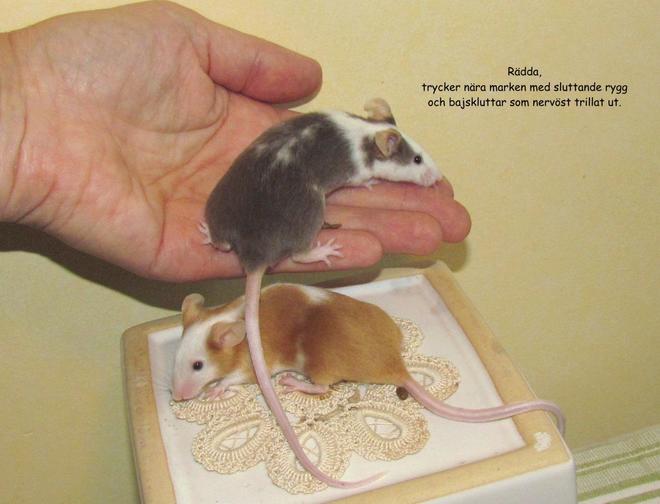 Scared, pressed close to the ground with a sloping back and poops nervously. 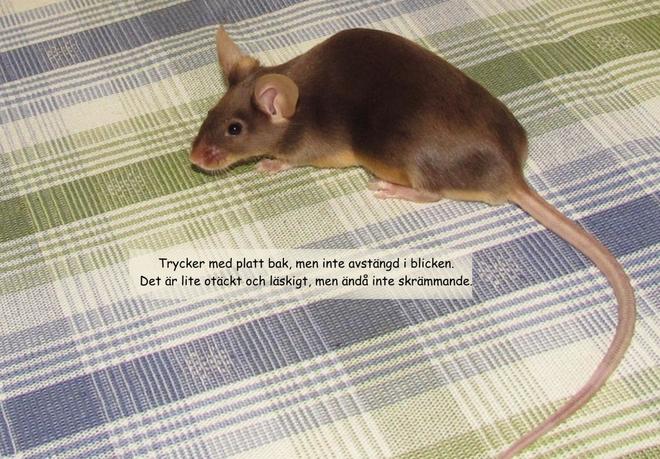 Presses with flat back, but not turned off. It's a bit tough but not terrifying. 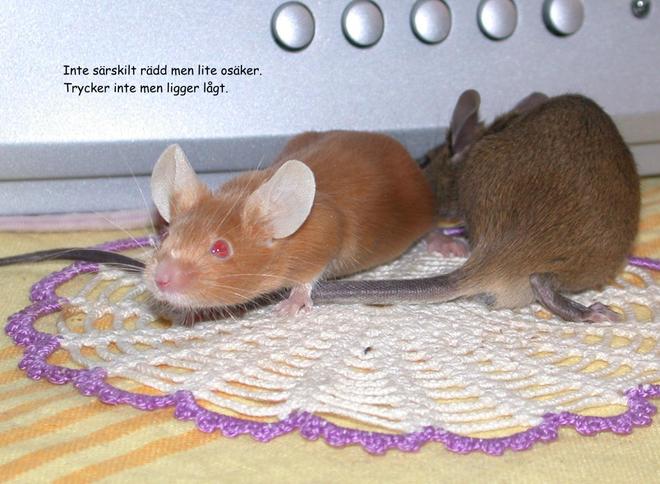 Not very scared but a bit uncertain. Do not press but lie low. 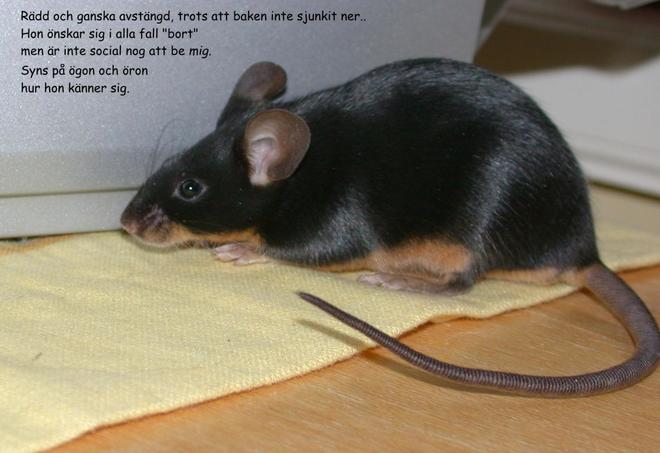 Frightened and somewhat off, even though the back has not fallen down .. After all she wants to go "away", but is not social enough to ask me. Visible to the eyes and ears how she feels.

Sometimes you can press the front instead of the back …

Less scared mice still stay still, but wondering. They can stretch out and air in different directions, while eyes and ears are attentive. 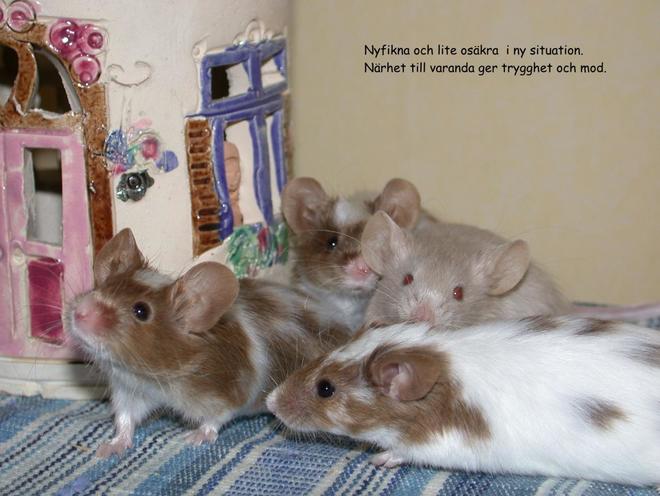 Curious and a bit uncertain in a new situation. Proximity to each other gives security and courage. 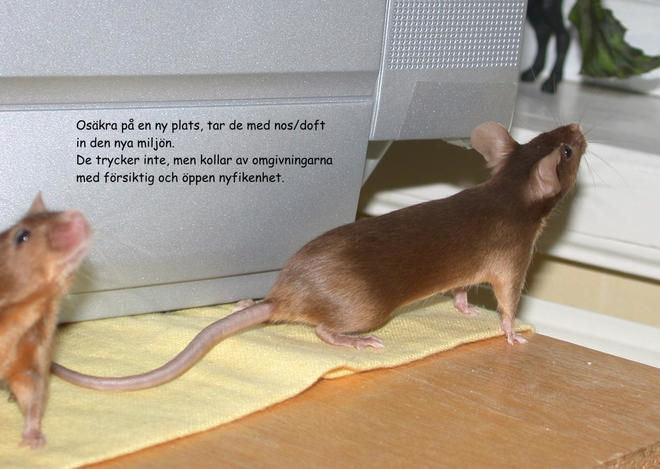 Unsure of a new location, they absorb the new environment. They do not push but look at the surroundings with careful and open curiosity. 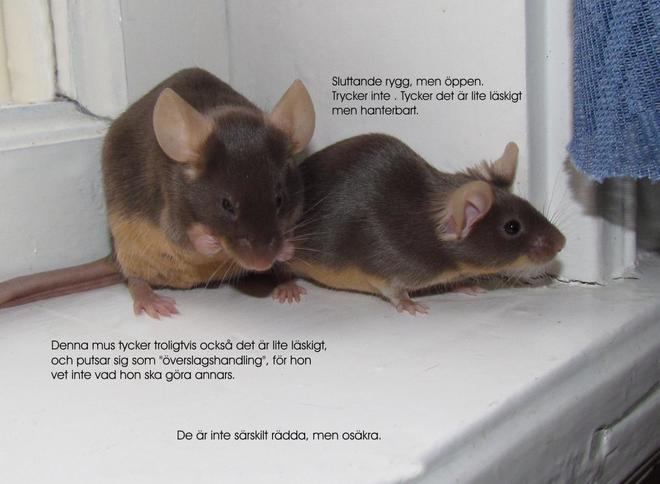 They are not very afraid, but insecure. One is grooming as displacement activity, for she knows not what she should do otherwise. The other is open with sloping back - do not press when she thinks it's scary but manageable. 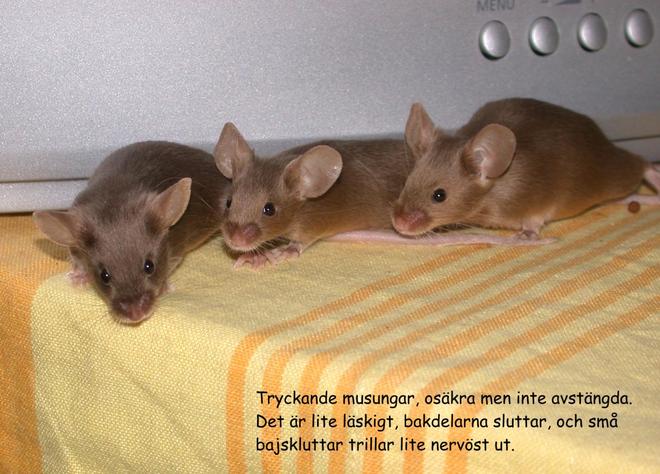 Pressing mouse pups, unsure but not shut down. It's a little scary, buttocks slopes, and they poop a little nervous.

When the mouse is relaxed and not afraid, the stomach lightens the ground! Ears and eyes take pleasure in everything in the surroundings and curiosity is great. Curiosity is the hallmark of the mice! But they need to be relaxed and unscared to get there. 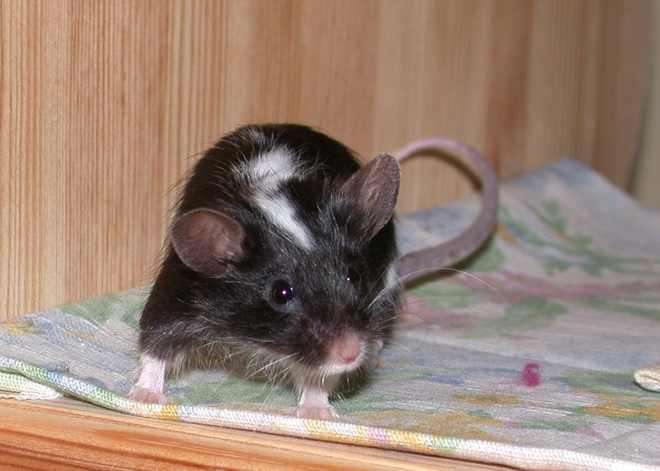 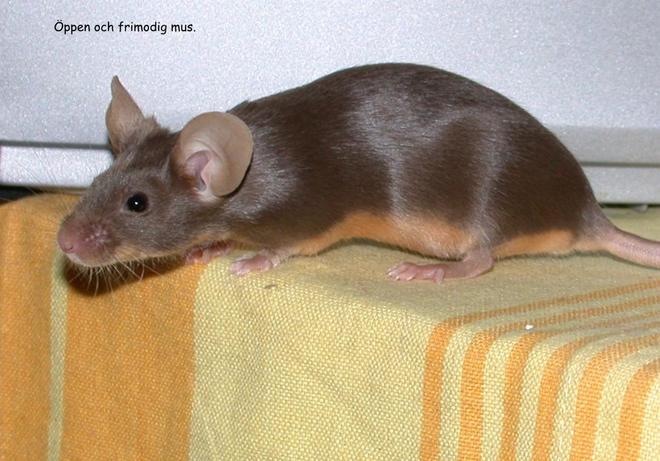 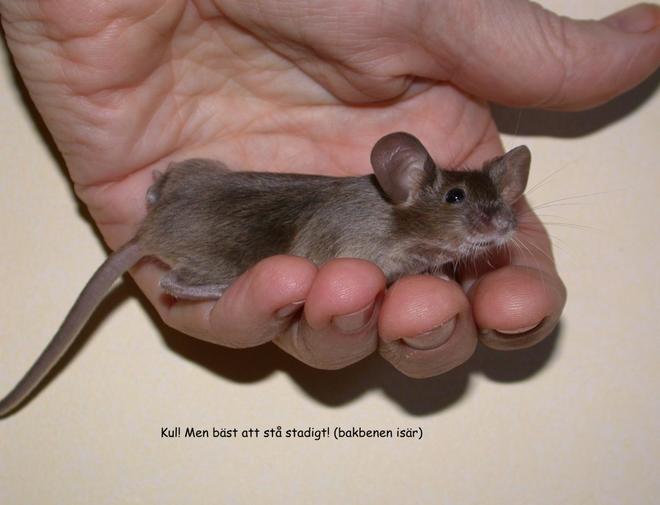 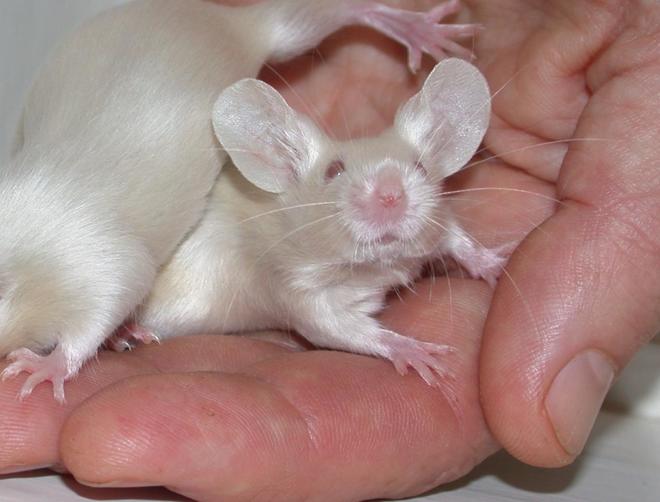 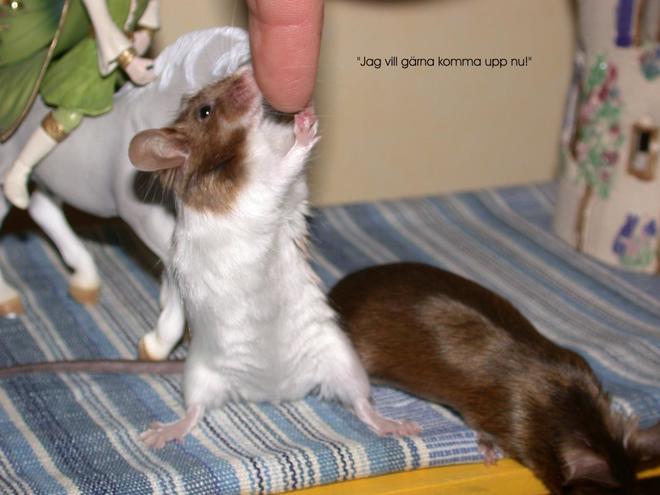 Unscared and relaxed, the intrinsic joy and curiosity of the mouse expresses itself! Is it social too, it interacts with me . It is not only curious about its surroundings, but also on me, my camera, and what I do. It will happily come up in my hand to explore things closer and to participate in my activities.

Images below: Social mice released on the floor, examining under the armchair (see tail), but when I'm call, it chooses to be with me. 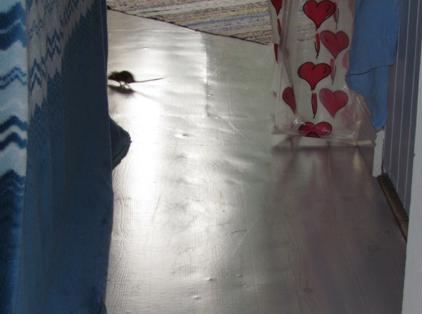 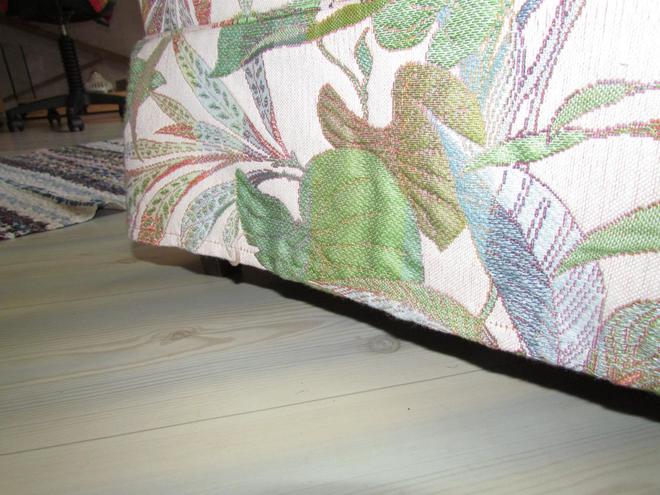 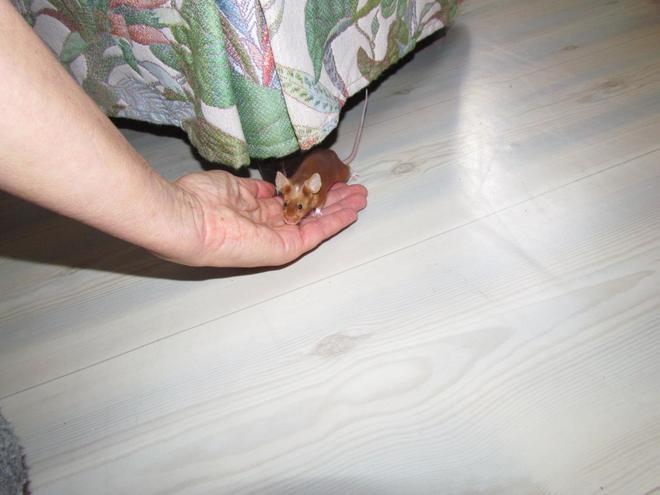 How many mice do you own?

All the best, Leia

I´m not the writer of the Article, and it´s not my mice on the photos. But I can answer anyway. At the moment I own about 60 mice. I think the writer owns about 20 mice, maybe a bit more, but she likes to keep the numbers down.

I also like to keep the numbers down, but at the moment I have a bit more than I want.

Start your own community!

Get started in minutes. For free of course!

All the best, Leia

60 mice is a lot! Wow! How long does it take to care for them everyday?